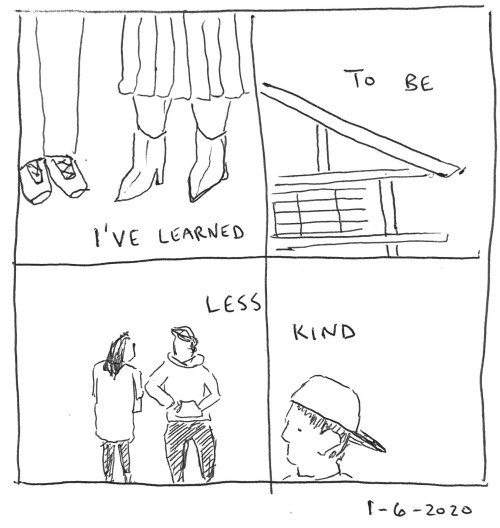 It was the Mormons who first taught me to be rude.

When I lived in Dallas, they used to circle the parking lots of malls and department stores on bicycles, targeting shoppers who walked alone.  They were better trained than any used car salesman– any polite decline of their intentions on my part was met immediately by a rehearsed counter-proposal.

There was no nice way to get rid of them.  I was forced to be abrupt and slightly menacing.  It was the only strategy that worked.

Then came the door-to-door salesmen.  “I’m one of those college kids working my way through school by selling…” and I fell for it the first time.  Next was the slight variation, young Black men selling magazines “to keep me out of gangs and on the right track.”  Now I’m in the suburbs, and after every thunderstorm men with clipboards appear wanting to inspect my roof.  They can get me a free replacement from my insurance company, they say.

So I have learned to peek through the window first, and not answer my door if it isn’t someone I recognize.

I don’t answer the phone anymore, either, if I don’t know the number.  It’s likely to be a “charity” I’ve never heard of raising money for the police, the troops, or cancer patients.  Sometimes it is someone offering to update my Google listing, whatever that means.

And I resent the people who have forced me to make that choice.